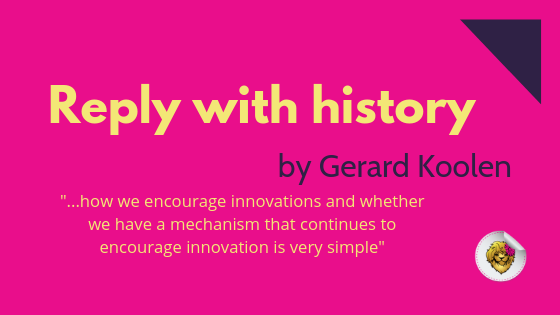 Reply with history: Plenty of ideas, but…

The answer to your question of how we encourage innovations and whether we have a mechanism that continues to encourage innovation is very simple. These mechanisms are generally called Cristina and Gerard. Looking back, most innovations in the organization have come from Cristina and me (Cristina is a partner and Country Manager in Romania and she has developed Lugera into the largest employment agency in Romania). And I think I know why this is.

First, I want to stress that this has nothing to do with any lack of creativity at all of other colleagues at Lugera. On the contrary. There is never a lack of good ideas amongst our team members. When having sessions on improvements, as a rule everyone knows what needs to be improved. It is just not always put into practice.

My teacher of Commercial Economy always said that marketing is one percent creativity and ninety-nine percent hard work. And I think this is the essence of innovation. There is no lack of ideas in the world. Most of the people have great ideas in abundance. I think everyone has (had) ideas which are implemented by others later on. I often hear people say ‘I already had that idea, and look, somebody else is now carrying out my idea’.

Innovation is much less about the idea itself, but rather about the realization of the idea. Most ideas, however, remain only ideas and never get beyond the talking stage. It requires an enormous amount of effort and perseverance to make a new idea into a commercial success.

First, you need to overcome an enormous amount of negative resistance in your environment from colleagues, customers, and suppliers. And colleagues are often the biggest negative force. Perhaps, because innovation brings more work, change, and uncertainty with it.

Second, the success of innovation is always much later in coming than you imagined or planned, which makes many people give up. In the beginning, there is enthusiasm, but the longer it takes, the less enthusiasm. We, my colleagues and I, have started countless new things which in the end came to nothing.

Third, the original idea has to be adapted in various ways and a high degree of flexibility and understanding is needed. The longer the implementation of the idea takes, the fewer people will support it.

And fourth, I often notice that with the introduction of the idea and during the implementation most people simply do not see the possibilities and potential of the idea.

In short, there are plenty of great ideas. Money is of minor importance for innovation. Successful innovation is the result of hard work, perseverance, seeing opportunities and unshakeable confidence in yourself and the idea. Passion and focus (and stubbornness) are required. I do not think that governments have a role in encouraging innovation. As a rule, government money achieves little and is wasted in this area.

GK
Previous Post Birds of a feather, flock together Next Post Reply with history: Innovation’s in the genes

Reply with history: Innovation’s in the genes

I addressed our wonderful recruitment team in Bucharest…